Once everyone arrived, the majority of the campers are from Washington State! Escaping the grey and wet. One of the fellows found out from the park service that fires are allowed this time of year, so both nights we had a gathering around the campfire with tall tales and star-gazing.

I didn’t write anything in my journal during these next bunch of days. We walked, and cooked, and conversed and explored.

A man in a sedan drove in and parked. He was friendly and asked if we minded if he set up there for a short while. Of course we said, sure, and then we got curious. He had a drone and gave us a little information session on the flying things.

He makes video for backdrops, then people can buy from him and insert their own images – for example: he takes footage of a mountain, then someone superimposes an image of themselves climbing the cliff-face or paragliding in front of it.

Ah, technology, allowing us to bend reality and truths in a whole new manner.
I find it pretty fascinating.

Argos made a new friend too! Although, I have forgotten her name 🙁
They enjoyed romping quite a bit.

I’d been sitting for three days and for some reason my batteries weren’t fully charging, even under the desert sun. I got worried and at one point ran my truck for an hour or so. Running the truck just to charge batteries I find wasteful and polluting, but it was either that or break camp and go for a drive. It didn’t help a lot. I then decided that as long as nothing actually failed, I would try to not worry much about it. I only moderately succeeded, but nothing did fail.

I tried to get a picture of us all in one photo, and I didn’t manage to do that. I got two photos, and in each one person/camp is missing. 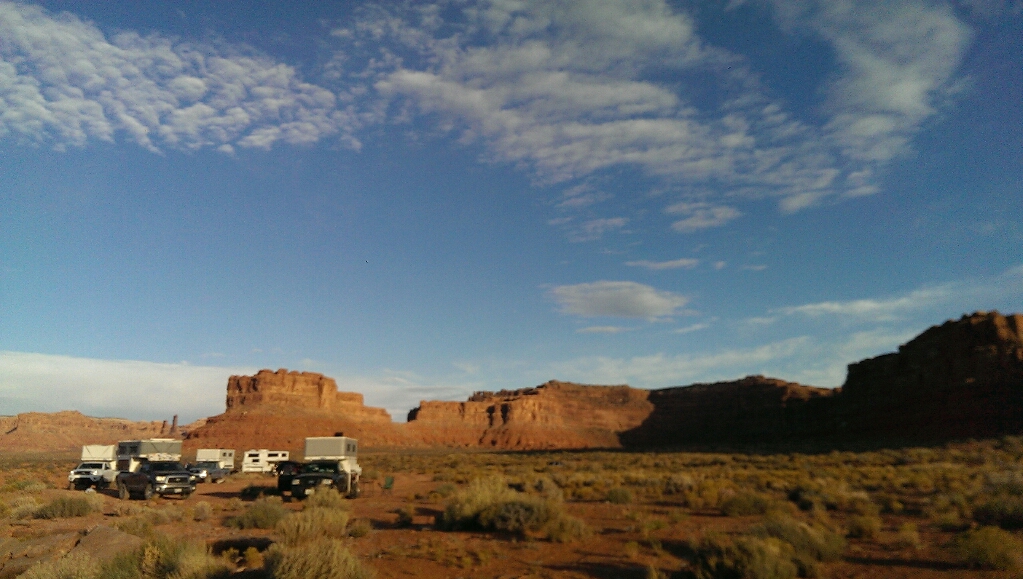 I did finally figure out where to put the campfire, and as a group we moved the pile of rocks I’d collected on Wednesday to a more central location. And we built a fine campfire pit.

We had a pre-planned potluck and it worked out really well. One fellow brought his homemade chili, and it was enough for all of us! We had guacamole, and tortillas, and a few other dishes. I was surprised how well we ate out there in the dusty desert. Chairs were pulled up to a couple of portable tables, and we enjoyed a lovely sunset dinner.

It was really enjoyable being next to a campfire with a group of good folks sharing stories and gazing at the wondrous milky way’d universe above.