This is a day-in-the-life snippet of how anxiety can affect me.
I want you to know you can adventure alone, as a woman, as a person with anxiety and panic attacks, and still have it be a good experience.

I should have moved my camper to another spot here when I had the chance. Now it’s too late – all the spots are full and it’s dark outside.

It’s been five hours and I haven’t been able to stop worrying about my truck rolling off the cliff where my camp spot is set up. I put big rocks under each tire, the e-brake is on, the truck is in “park”, and so far, it’s never rolled while parked. 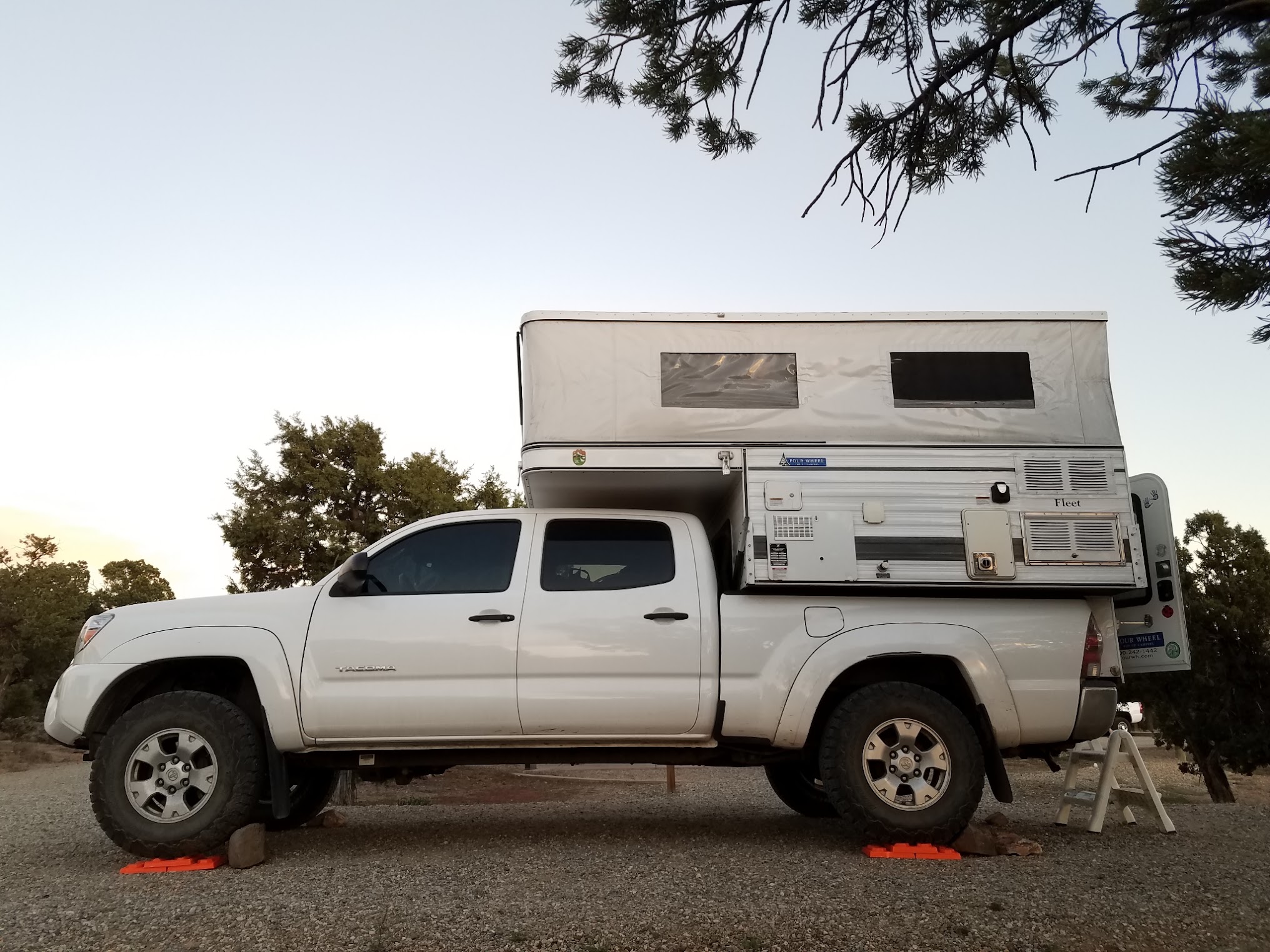 Why didn’t I just move if it’s so bothersome? If I’m not going to sleep well because my mind won’t let go of this one awful thought?

Sometimes I do move. Sometimes I don’t have the energy to fight it. The trick, after dealing with panic attacks and severe anxiety for over 30 years is to recognize when it’s totally irrational vs. somewhat irrational with some credibility vs. credible.

Could I roll off this cliff? Sure. How likely realistically is it? Not very. Okay, probably not at all. Well, it could happen, but it’d take a lot for that to happen and the odds aren’t with that.

Of course, in my mind, the truck’s momentum (from a parked stop?) somehow overwhelms the park and brake and big rocks and rolls me and the dogs backwards over the cliff in the darkest hour of the night. Because, see, it takes a number of hours for the pressure of the slight decline I’m parked on to work on the weight of the truck.

Great. Maybe I will  just move to the “day use” area for the night. 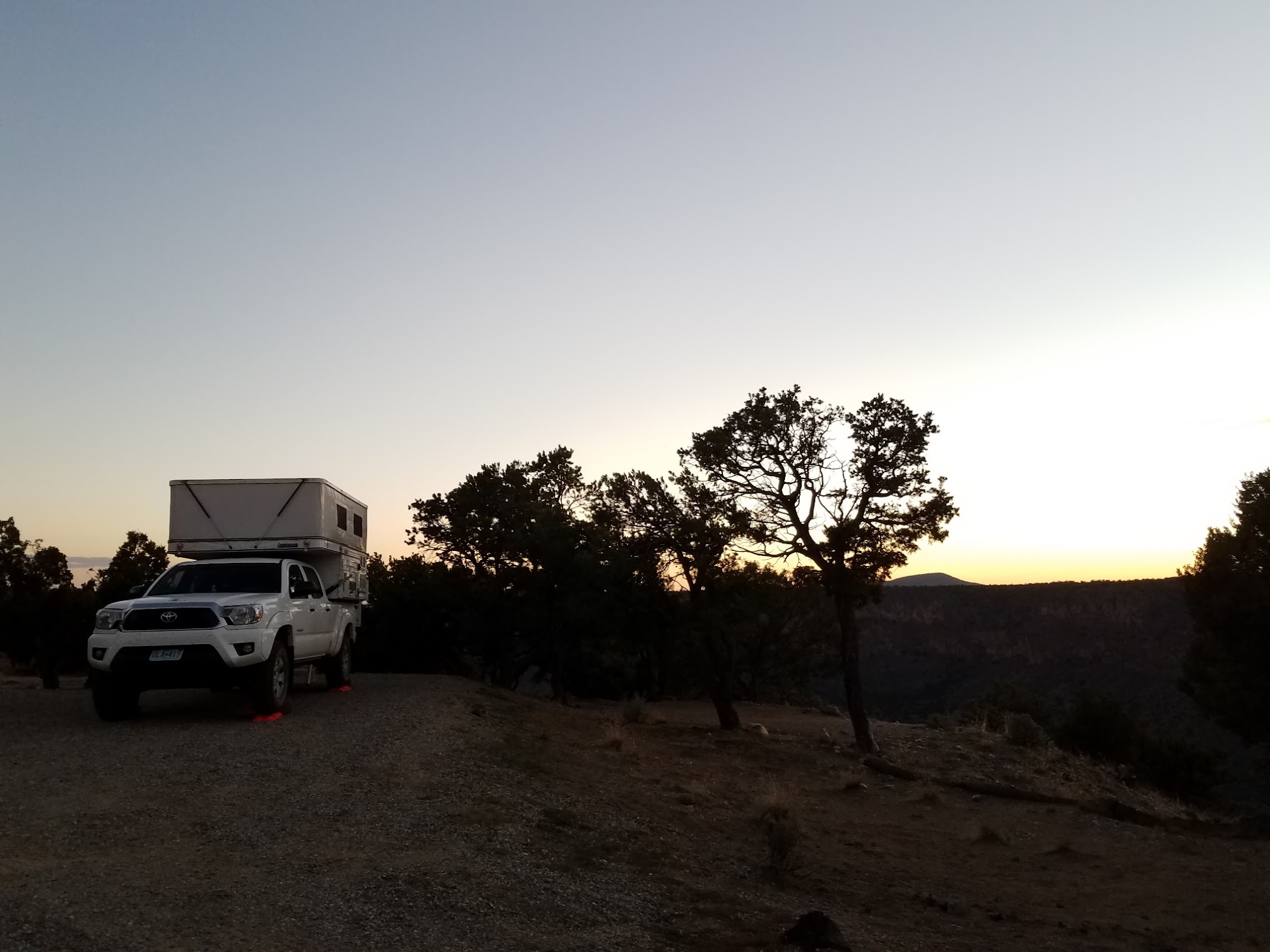 I had my first-that-I-can-place panic attack when I was 17. Then no problems with that for a year or so, then I started having them regularly right before I started college. For about a year or year and a half, every evening at twilight I’d get an anxiety around twilight when the day turns into night and the shadows are long and nothing has sharp edges or focus as the sun sinks lower on the horizon. Driving helps. I think because I had to focus on something other than the anxious feelings.

The anxiety waned for another year or so, then smacked me in the middle of my acting studies. Panic attacks screwed up college, then took my love away from me. I stopped taking classes and auditioning.

In my early 20s the panic attacks were so frequent and invasive I couldn’t hold a job. I finally got on some medication and re-learned how to function without panic attacks. The meds had an uncomfortable (side)effect of making me feel like there was a plexiglass wall between me and my feelings; I could see them, but not really touch them. I only stayed on that medication for about a year, but it did what it was supposed to do.

Since then, I’ve had panic attacks and horrible anxiety but not so frequently that it disrupts my life (too much). I’ve learned various coping methods and tools – using breathing exercises and meditations learned during my acting training, having a few supportive friends I can bounce “it’s okay, right?” off of, and a lot of self-talk.

But sometimes, like now, when I’m not feeling well physically and didn’t sleep well the night before, or am worn out, it’s more difficult.

I’ll take a Benadryl tonight. The antihistamine not only helps with my allergies, but it’s sleepy-making and this helps take the edge off the anxiety. I still won’t sleep well tonight though. That ever-present anxious watch-dog nips at my heels even in the most beautiful of locations, dulling the beauty because so much of my attention is focused on not getting overwhelmed by the anxiety.

Having the dogs with me helps.

Why am I telling all you about this aspect of me? Because so many people suffer from crippling anxiety and panic attacks and I want y’all to know that you can still adventure and travel. It just is often more difficult and sometimes terrifying than other folks have to deal with, but it’s worth the effort!

8 thoughts on “Adventuring with Anxiety”