Tomorrow is the Winter Solstice and yesterday I climbed a mountain to find some hot springs, but first stopped at Silver City, New Mexico. Silver City, NM is an artsy little town similar to a couple of other mining towns I’ve visited, Jerome and Bisbee, Az. It’s interesting that artsy little towns grow from the chaos and destruction of the mining industry. On the way to Silver city, is the Continental Divide Trail.

When I arrived at Silver City, my plan was to drive up to these hot springs, but instead I lingered around a café. I didn’t quite have the motivation yet, or perhaps I was just hungry. A man named Nick struck up a conversation about places to visit in the area and we ended up going to lunch at the Little Toad Creek Brewery and Distillery. They have a curry vegetable dish that is spectacular! 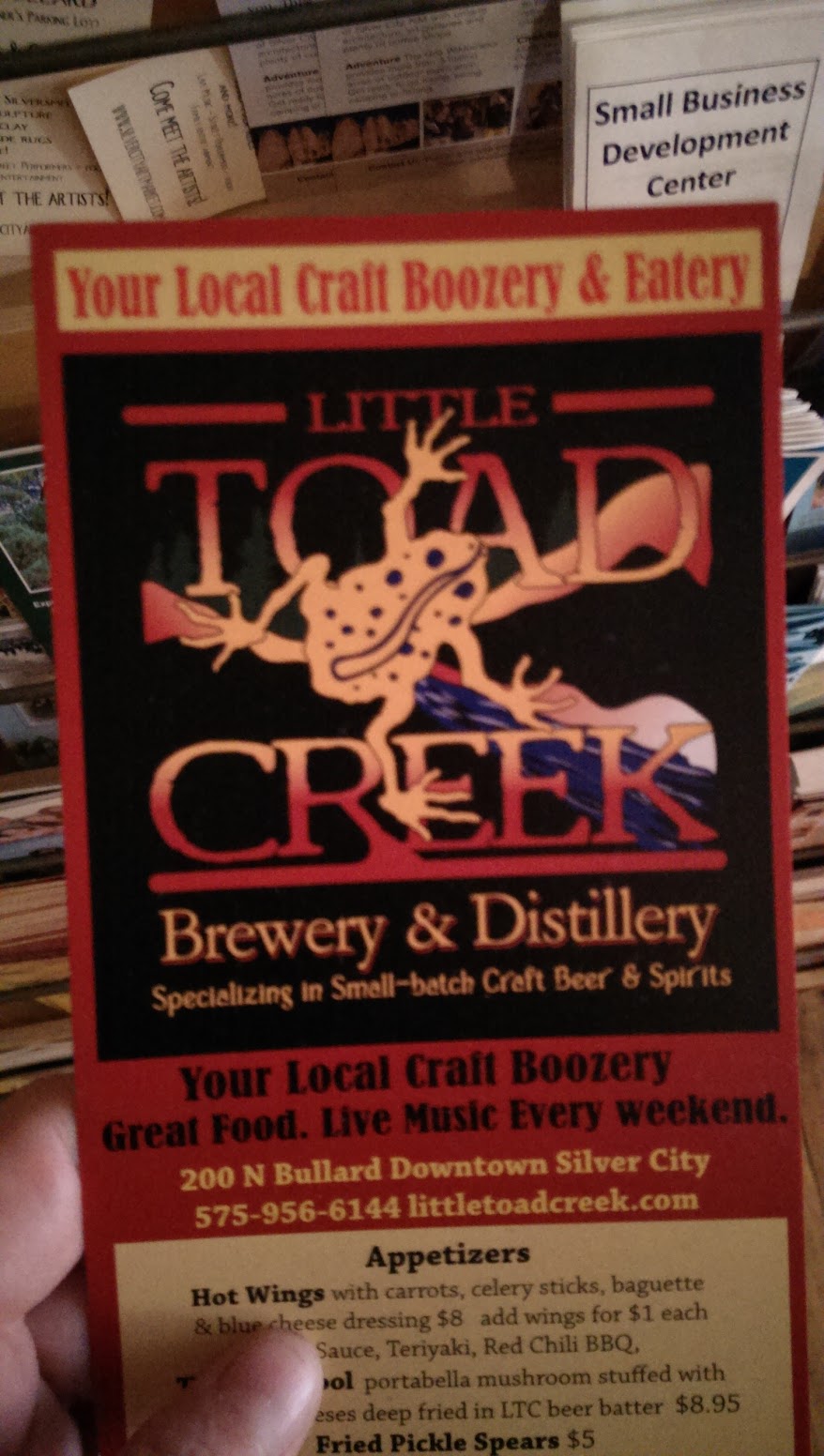 After lunch, and against my usual unease around strangers, I agreed to follow him up the mountain to the hot springs. It’s somewhat developed, and on private land, so I figured (hoped) there would be other folks around.

The 40 mile drive took over an hour and a half, up some severely twisty mountainy roads. This would be a fun road on a motorcycle, with the usual cautions of cars crossing the centerline.

There is a little booth set up for taking the minimal fee – I think it’s $5 for a day of soaking, or $6 for camping.

The campsites are close to the three multi-people sized tubs, so I set up and we headed for a soak.

Star gazing while lounging in a hot tub on a wintry mountain night in December is one of life’s small pleasures. Actually, star gazing from any hot tub anywhere is a pleasure. But this is a special treat.

Nick had planned to drive up, enjoy a soak and a fireside chat, then head back down the mountain to his home in Silver City. However, on the drive up we crossed over more than a few snowy or wet patches that would turn icy once the sunset. He decided to stay over as well, and after our fireside chat, he retired to his Subaru. Unfortunately, since he hadn’t planned to overnight, he didn’t have anything warm in his car. I loaned him the quilt my friend Julie made for me, but it wasn’t enough. When I got up at 7am to walk the dogs, his car was gone and there was my comforter on the hood of my truck, and a sticky note on the windshield. “too cold”.

I took a morning soak and met Clint, Shannon, and their doggy Heidi. They live full-time in a somewhat beat-up 80’s van. She’s relatively new to this lifestyle, but he’s been a road bum for over 7 years. He’s got a degree in Criminal Justice, is a certified welder, and mechanic. He has hiked the Continental Divide Trail a few times, along with the Appalachian Trail. I think he said he’s also hiked the PCT, but I don’t remember. They work odd jobs, and spend a month max in one place. They are content. Heidi has hiked thousands of miles with him. I think I need to get Argos some booties.

We talked for quite a while during our soak in the open tub. When I said I didn’t think I’d like the congestion of the Appalachian Trail, he mentioned a philosophy they have on the trails: HYOH (Hike Your Own Hike) . It is very much like the motorcycle creed of “ride your own ride” – don’t try to keep up with someone else, or pace with them. Do your own pace and level. It’s a solid philosophy.

They moved on from the campsite and I retreated into my camper for breakfast and coffee.
I am tempted to stay here another night. A friend in Prescott is trying to connect me with a friend of his in Silver City. Unfortunately, the woman is out of town today, but will be back this evening. I’m trying to decide if I feel like hanging out for another day, and meet up with her tomorrow, or head out?
It’s now 9am and I’m about to roll the dice again.

One thought on “Silver City and Gila Hot Springs”