After a couple of well-fed days visiting friends in Springfield, I headed to Urbana, Illinois. I met my recently married step-brother for lunch and then went to find the duplex my mom and I lived in when I was in 3rd, 4th, and 5th grades. We lived in the right side further from the garage. I think it was white when I was a kid. We had an old Fiat that took a couple of hours to warm up in the winter.

Urbana was a place of tornado warnings, cobble-stone sidewalks, school-ground battles – especially in tetherball, best friends and a lot of tree-climbing.

I was a latchkey kid. Mom was in school working on her Master’s degree. This little duplex was only a block from school, so I’d get myself home – or more often, I’d banana-seat bicycle over to Carle Park and meet up with my best friend, Becky. Once I found a disposable camera and eventually had the film developed. It was of someone’s wedding at the park. I felt bad that I couldn’t return the pictures to them. In that park, I learned about cross-country skiing and have wanted to try it since. I took magic lessons there and learned how to put a quarter through a table. There was a play set that would not be allowed these days. It was a huge wooden structure with a long rope swing on one side. We would climb up, grab the rope, swing out and leap into the nothingness… and land in a sandpit. Such great (and probably dangerous) fun!

It was time to move on and leave my childhood behind. There is a campground just on the Indiana side of the state line, so I meandered my way to the Raccoon Lake State Recreation Area. I really need to figure out where to find boondocking out here mid-west and easterly. In the South West there is so much BLM land, it’s easy to just turn onto a random dirt road and set up camp in the middle of nowhere. Out here? I’m still on a slow learning curve.

That turned out to be a chilly night. I climbed into bed,read for a while, then noticed I was cold. My thermostat was set at 56, but when I looked, the inside temp was at 50. Bother. I futzed around with the thermostat for a while, thinking it was the problem, but wasn’t able to get anything more to happen than cool air blowing. The fan would run, but the heat wouldn’t kick in. Luckily, it didn’t get terribly cold that night (probably down to the low 40’s) and I have a cozy warm down comforter and two doggies. Although, while Pugsly is smart and snuggles under the covers with me, Argos sloughed off the blanket I covered him with, and lay shivering on top of the bed.

The next morning I headed towards cities in search of an RV shop for repair. I came to Terre Haute and stopped for a warm up coffee and thinking time at a little highway diner. The waitress told me about an RV shop just up the road, so I headed over.

The guys in the shop had me roll my camper into the huge garage that is more used to accommodating gigantic Class A motorhomes than little truck rigs like mine. Shop manager Jeff and mechanic TJ took a look, jumped the thermostat to make sure that wasn’t the issue, and after tested all the wires and even switching out the circuit board with a new one they had in stock, it was determined that the problem part was the igniter. 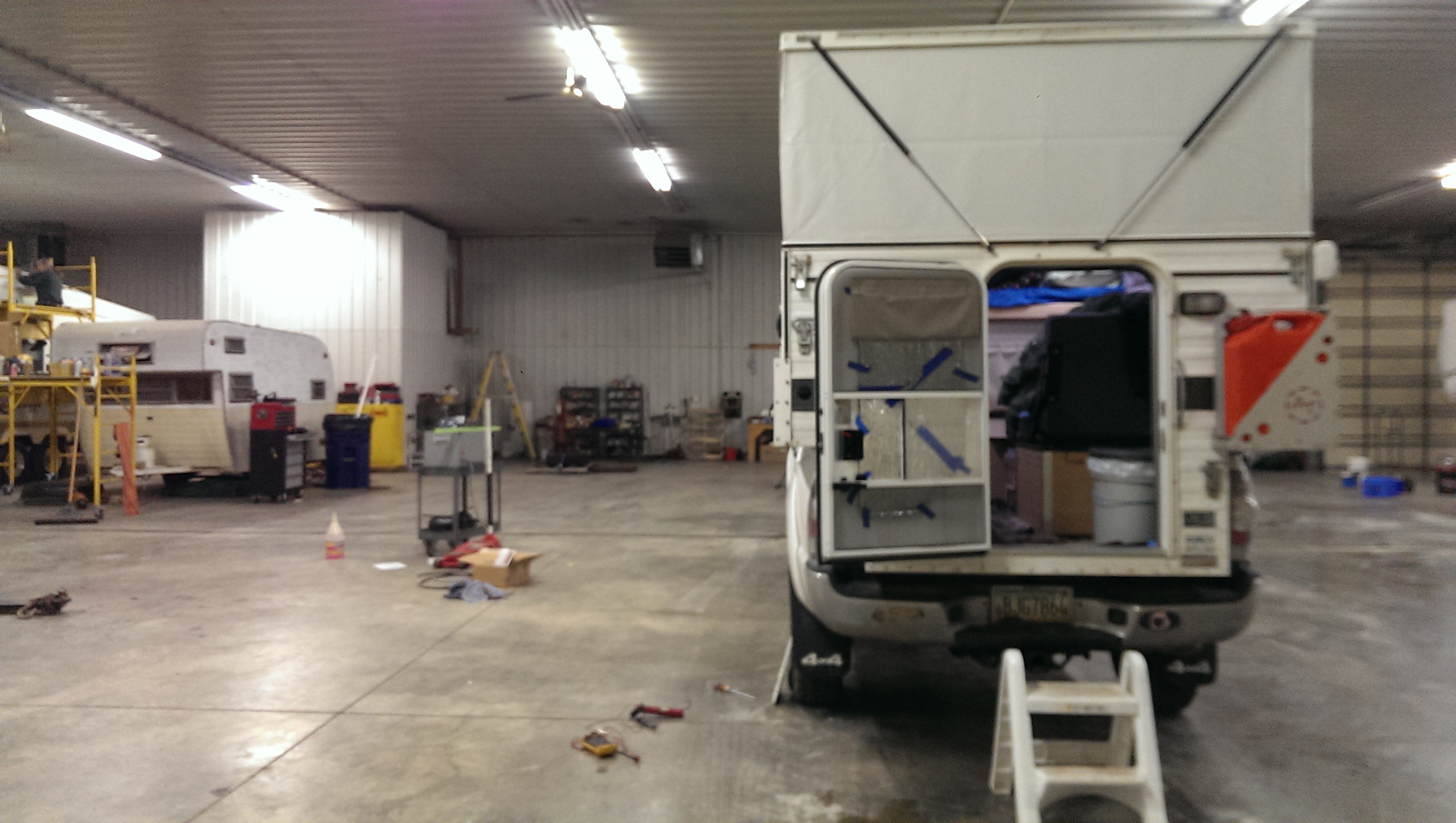 Unfortunately, they didn’t have one in stock so Jeff ordered it. Word was that it would take two days before the part came in. Instead of going back to the campground, Jeff said I could plug in there outside the shop. Stuck in Terre Haute.

This was my grey home for the next couple of days. I had power and WiFi and I bought a little portable heater, so the dogs and I were cozy enough. 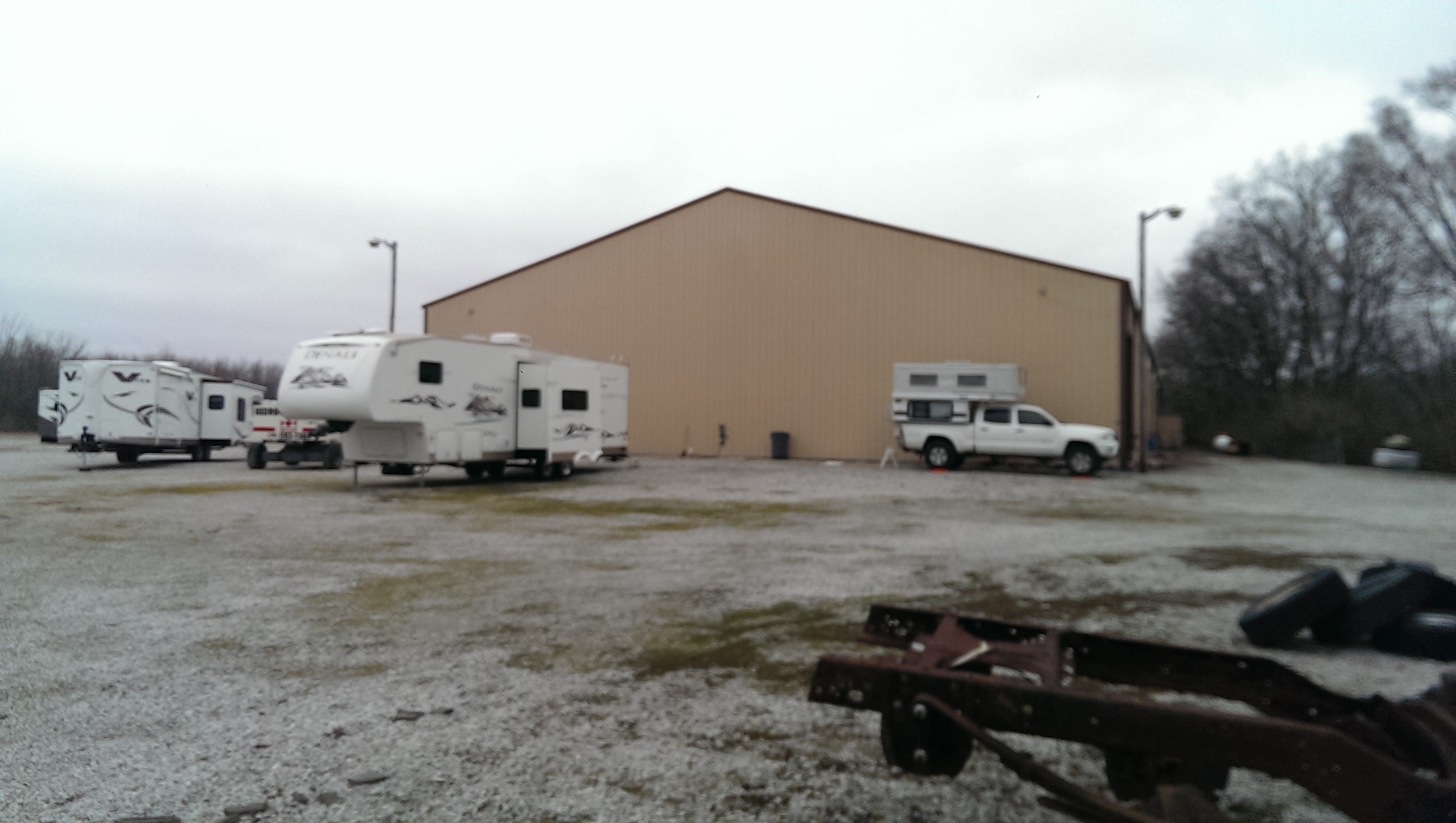 The igniter arrived on Friday, and Jeff installed it. We did a bunch of testing and the furnace works! YAY! Warm convenience!

There’s been a little issue with a bill and the RV shop’s warranty interpretation, and once it’s resolved, I’ll do a little write-up about that part of the experience.

Some close friends and my mom had been under the weather when I was in Carbondale last week, but now healthy, they suggested that since I was still so close, why don’t I swing by for another visit? I figured might as well stock up on groceries and do another load of laundry, so I went back home for another visit.

One thought on “Stuck in Terre Haute”