When I started this trip, I decided to subscribe to (full-time RVers) Technomadia‘s “2-2-2” rule: Drive no more than 2 hours, stay no less than 2 nights and be in to your next spot by 2pm. Over the past few months I’ve done pretty good adhering to that rule. It makes for much more relaxed driving, no ‘road buzz’ when you arrive, and allows for real downtime in a new location. With a full afternoon and next day to explore, you can get a decent connection with your camp-area.

While I’ve been able to subscribe to that plan for much of this adventure, these past few weeks were a bit frenetic.

I left Bluffton, SC to go back to Carbondale, IL again to try to figure out this work situation. I got a jobby job offer from my old company and felt I needed to ‘be responsible’ and so I headed to where responsibility lives for me: mom.

Spring was springing much too early, and they were worried a later March freeze would take out the flowers and the peaches. Southern Illinois has lots of peach orchards. But I enjoyed the warm weather immensely.

Argos made himself comfortable with my mom’s dog, Hula, and spent cozy time hanging out in her crate, when they weren’t chasing each other around the yard.

My mom and I spent a lot of good time together. We went for a drizzly walk on the Cache about an hours drive south-east from Carbondale.

It was lovely the next day and I decorated the camper with daffodils I picked from mom’s flower garden. 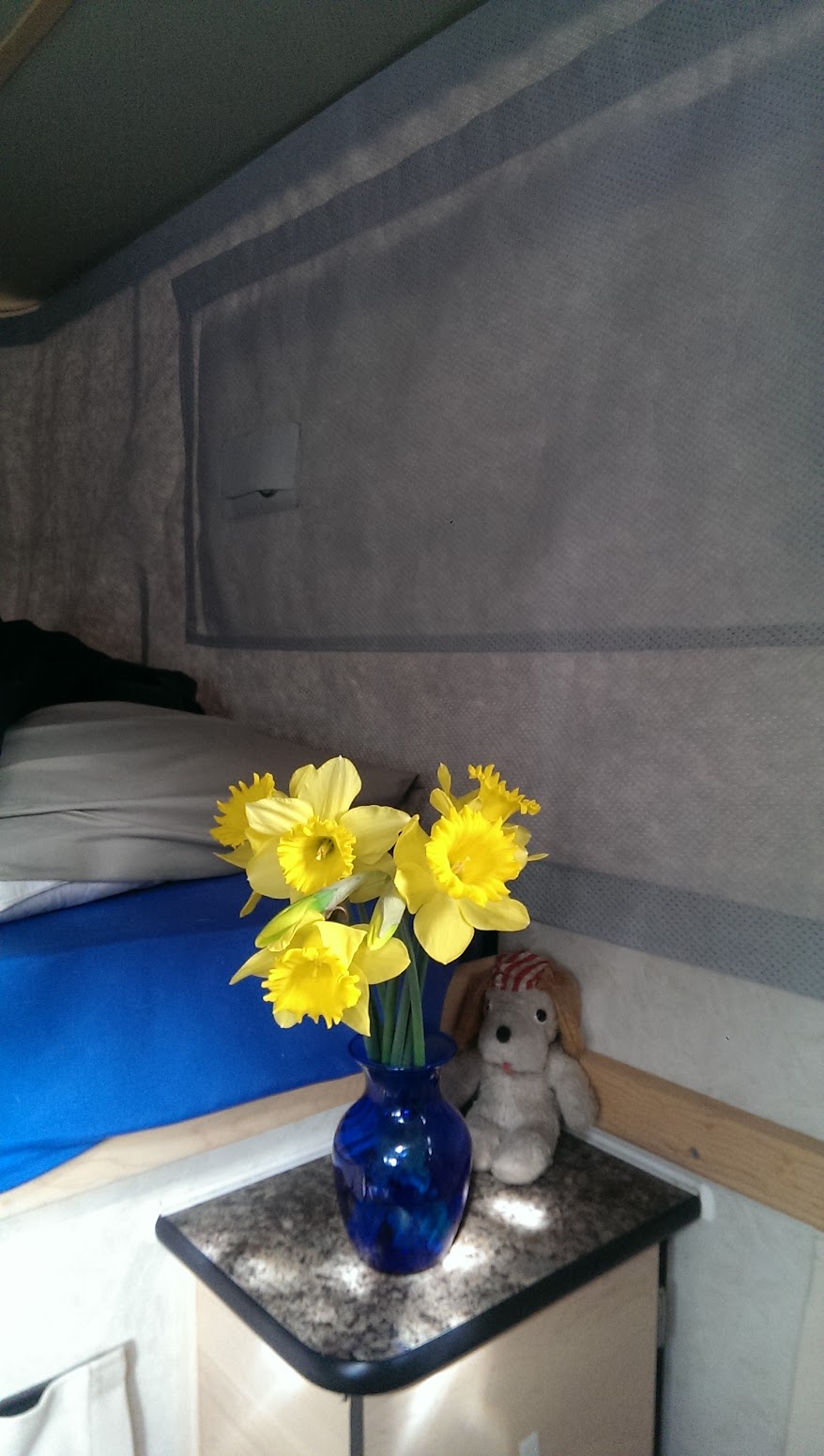 The weather shifted and I was reminded of one of the reasons I skedaddled out of the midwest when I was younger: tornadoes. There was a bonafide tornado warning around 10:00pm – for those of you who aren’t familiar with this stuff, a tornado watch is when weather conditions are ripe for a tornado and a tornado warning is when one has been sighted. This one was seen about 20 miles away and traveling at 75 mph! Whoa. My mom and stepdad’s house doesn’t have a basement, so we gathered our gear and went to the strongest and most protected point in the house – the hallway in the middle of the house.

Bug out Bags, helmets, flashlights. And dogs. And humans. 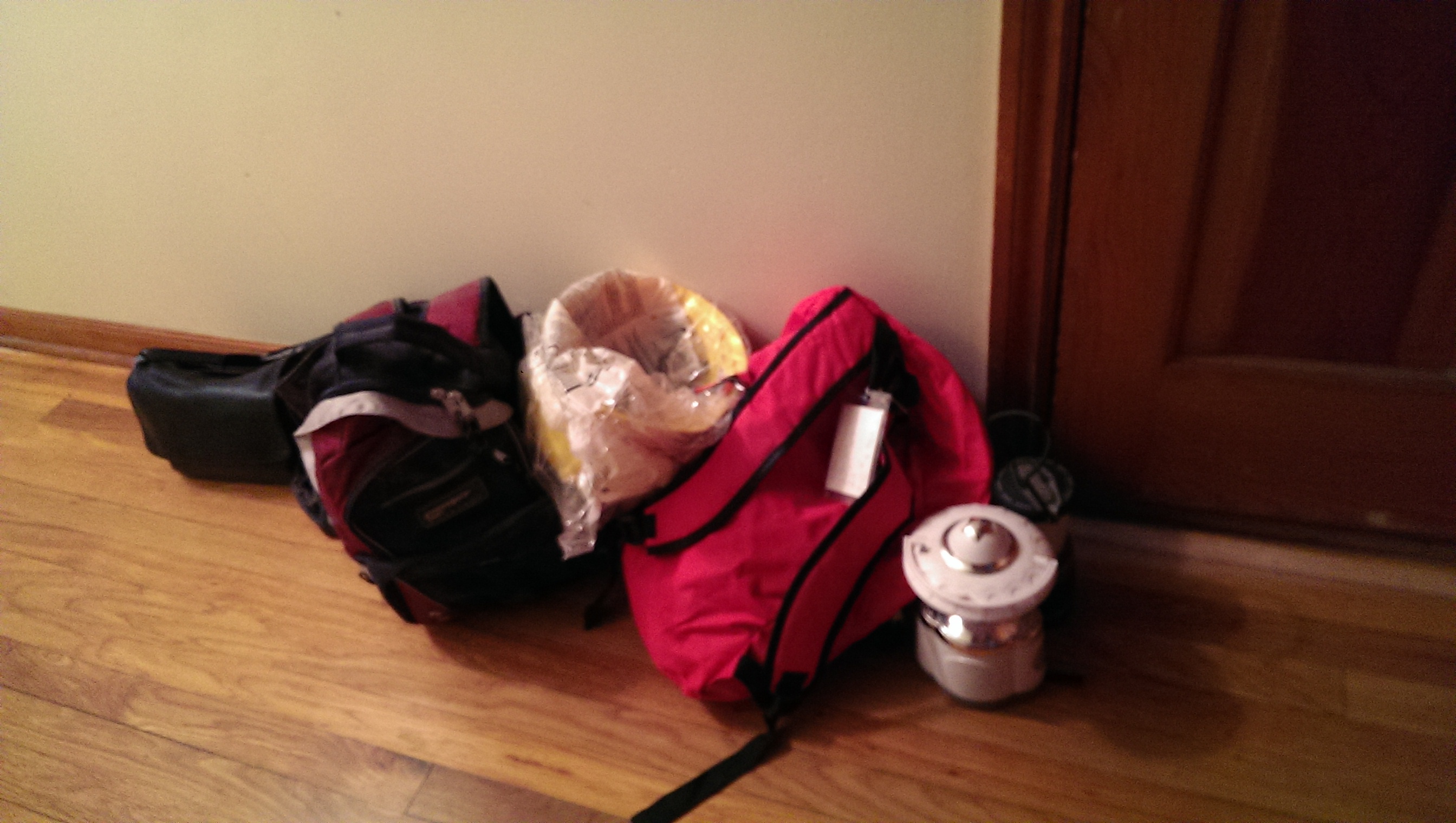 The alarm stopped and we made our way to bed. The forecast showed more storms stomping through around 4am, so sleep was sparse. Sure enough, at 4am the tornado sirens alarmed. We roused ourselves and spent the next twenty minutes in the hallway. Luckily, during both those times, our power stayed on and we were able to track the storm while we were huddled in our semi-safe space.

I grew up in Central and Southern Illinois and spent many tense nights in basements.
During stressful times in my life, I still have tornado dreams.

That first tornado storm wiped out a small town about 30 miles west of us, and did a lot of damage to a few towns over.

I didn’t get a photo of the houses that were wiped out because the families were there, but the Southern Illinoisan newspaper did.

Needlesstosay, I skedaddled pretty soon after that.

I spent a couple of days visiting friends in the region. Pugsly was getting on my case about the fact that I hadn’t updated this blog in a while, and decided to try to help me. She didn’t last long. 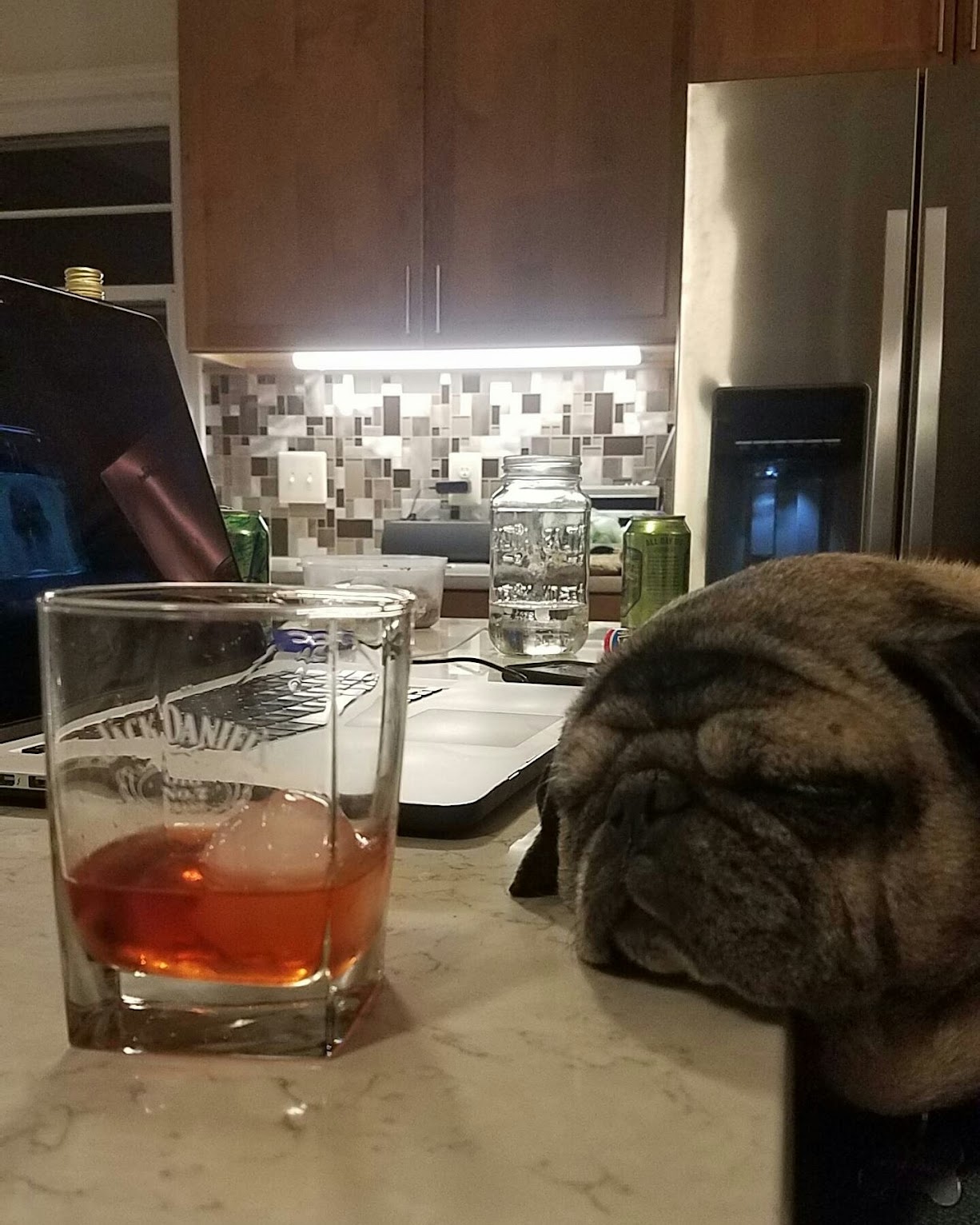 Mar 8 notes:
After spending so much time around people, even though I was antsy to get back to campering, it’s always a slightly difficult transition to go from always people to such solitude like here in the quiet grasslands of Oklahoma.

I often want to kind of ease back into it. It usually takes a night or two to get back comfortable. Once I’m comfortable again with the solitude, I tend to prefer it.

I’m running from “severe weather” predicted for the following night. The next day the forecast was changed to no particularly bad weather, but at that point, I was already in GTFO mode and I did. Four tornados touched down around Kansas City area. One touched down in the ‘burb where the job job is located.

50 mile per hour wind gusts made for a tiring day of driving. Optima National Wildlife Refuge has a seemingly abandoned campground out a dirt road to another dirt road. An owl serenaded me.

I made it to Albuquerque, where I met up with a fellow Wander the West‘er and popped up camp on his ample property.

My mom and stepdad have a 1967 Avion cab-over camper and they had gone to Louisiana for a few days. After reading about the amazing flower blooms in Anza-Borrego Desert State Park they decided to head west. We met up east of Tucson on I-10 and caravanned to Organ Pipe Cactus National Monument in southern Arizona.

Mom and I did some hiking and touring and found fields of pretty yellow poppies and a lot of other beautiful desert flowers!

Full moon in the desert.
I wish I could infuse this writing with the desert perfume of the creosote. 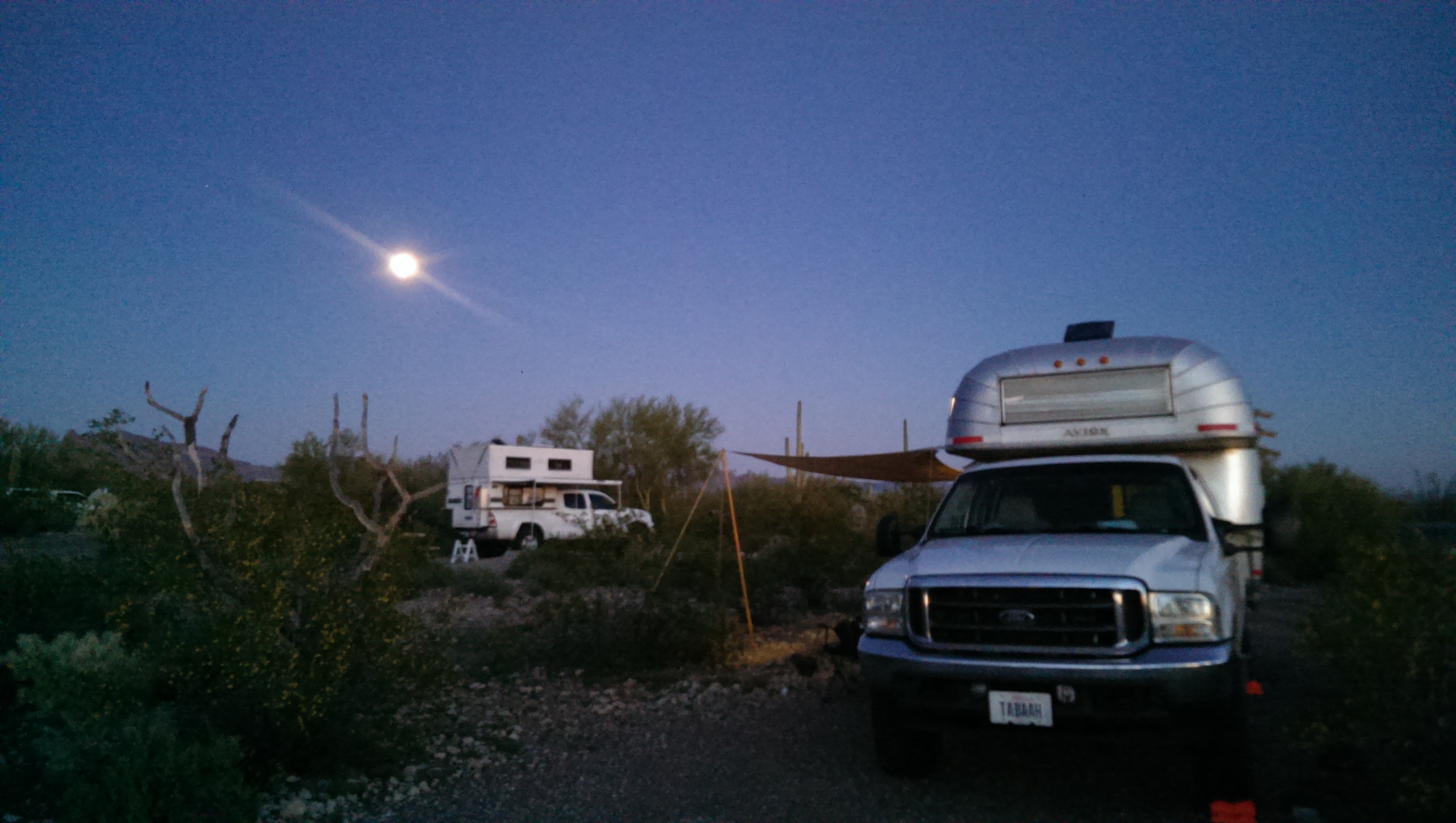 As I was packing up, a Wander the West’er saw my camper and came over to say hi! Neat! 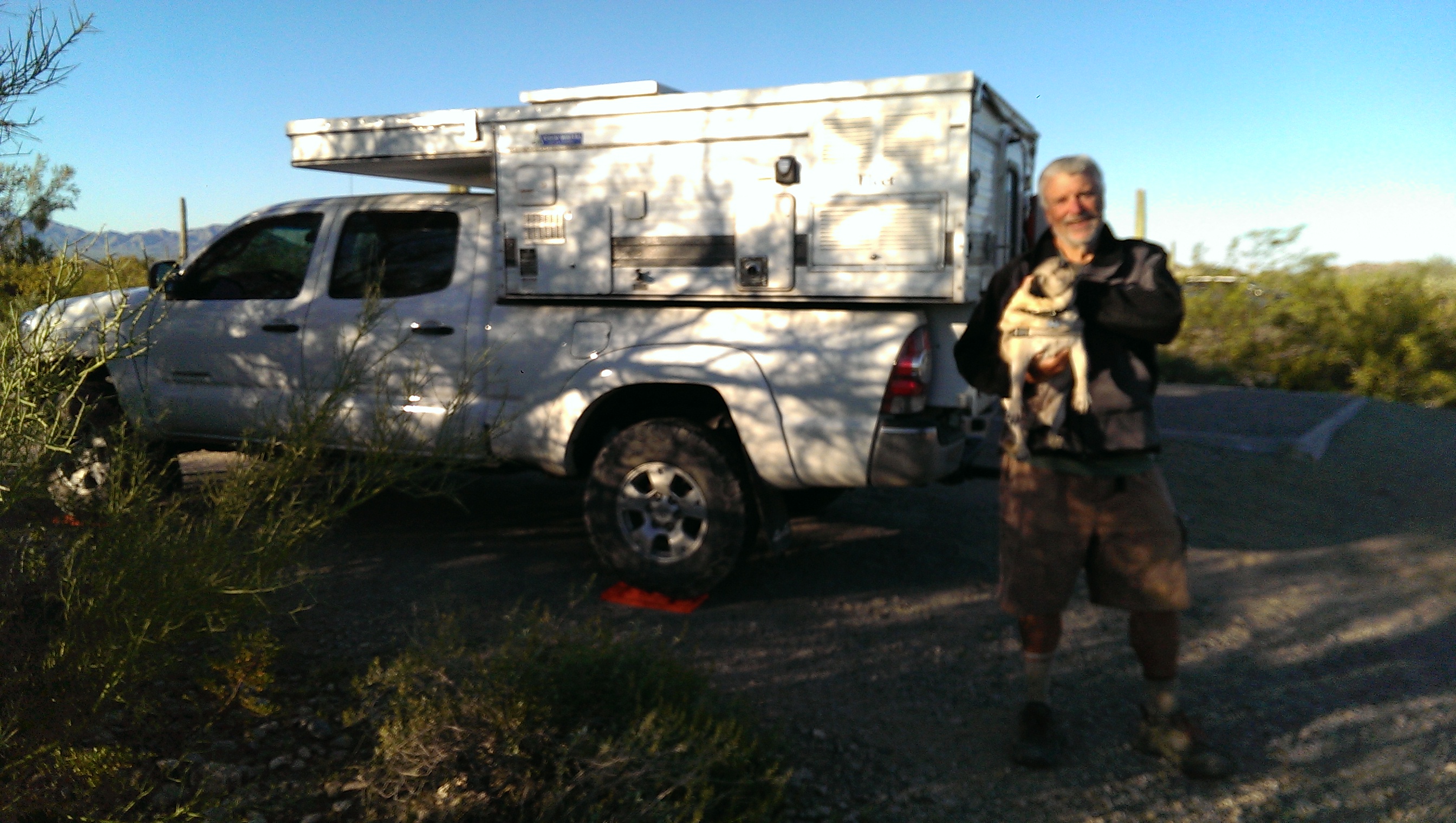 I wanted to go explore Kofa National Wildlife Refuge, but temperatures were predicted in the mid’90’s and, especially for the dogs, that’s just too hot to enjoy time exploring the desert. Instead, I headed to higher elevation back in Prescott.

When I hit Congress, Az I decided I didn’t want to take the well-known route up Yarnell Hill but instead set out on a dirt road called Date Creek Road. It was great for the first 15-20 miles, but then it turned into sand. I put the truck in park and got out to scout up the road and see how far it was sand. It was deep sandy and went on for a long stretch. I’ve ridden motorcycles in sand, and have gone through innumerable sandy washes, but I’ve not driven on a deep sandy road in my truck. I decided that alone in the middle of nowhere wasn’t the time to test my skillz, so I turned around.

I’m currently hanging out at a friend’s ranch in Skull Valley – a little ranch community south of Prescott. We call it RB Paradise Ranch. Horses, chickens, goatheads, Oh my! Argos is having a high time zooming around to his heart’s content.