I know I wrote about this some in my previous post, but I’m so overwhelmed by the kindness of people that I feel a need to write more. In the past couple of months, people I hadn’t met before, old friends I hadn’t seen in 20+ years, old friends I last saw two years ago, and newer friends I’d only met once before all took me in to their homes, welcomed me with open arms, were most gracious and generous hosts, and made my world feel much more comforting and loving than it has felt for a long time.

After I left my friends in Yachats on the Oregon coast, I made my way to Bend and visited some volcanos.
That was pretty damn cool.

But first I had a spooky afternoon and over the next few days a reminder of why it’s good to listen to your gut. Oh, nothing exciting happened, but that’s a good thing.
I found this lovely spot to boondock just outside of Sisters, OR., not far from Bend. I wish I’d gotten a photo of the carnage because after I got popped up, I found that I was parked in the middle of a semi-circle of what appeared to be a deer massacre. I did get a photo of a hoof, but I’m not gonna post it because some of you might be squeamish. I took the dogs for a walk, ate lunch, and read for a while, trying not to let it bother me. But it did. It was weird. There was no other location that I saw near by that had any similar ring of carcasses. Did I stumble into some location where rituals took place? Would scary night creatures appear once the sun went down? (at this point I should ask for you readers to pretty, pretty please not comment on these ideas. I can’t watch ads for scary movies, so I’d appreciate if you refrained from giving my overactive imagination more fodder.) If I write more on that, I’ll scare myself, so suffice it to say that I was creeped out. As early evening and sun down approached, I knew that I wouldn’t get a good night sleep there so I decided to move location. It’s okay to listen to that little internal voice, even if you think it’s kinda silly.

I decided to go down to camp at Paulina Lake – part of the Newberry Volcano, but as I drove south on highway 97 it got smokier and smokier. I turned around and found this pretty spot in the forest just south of Bend and got popped up before dark. 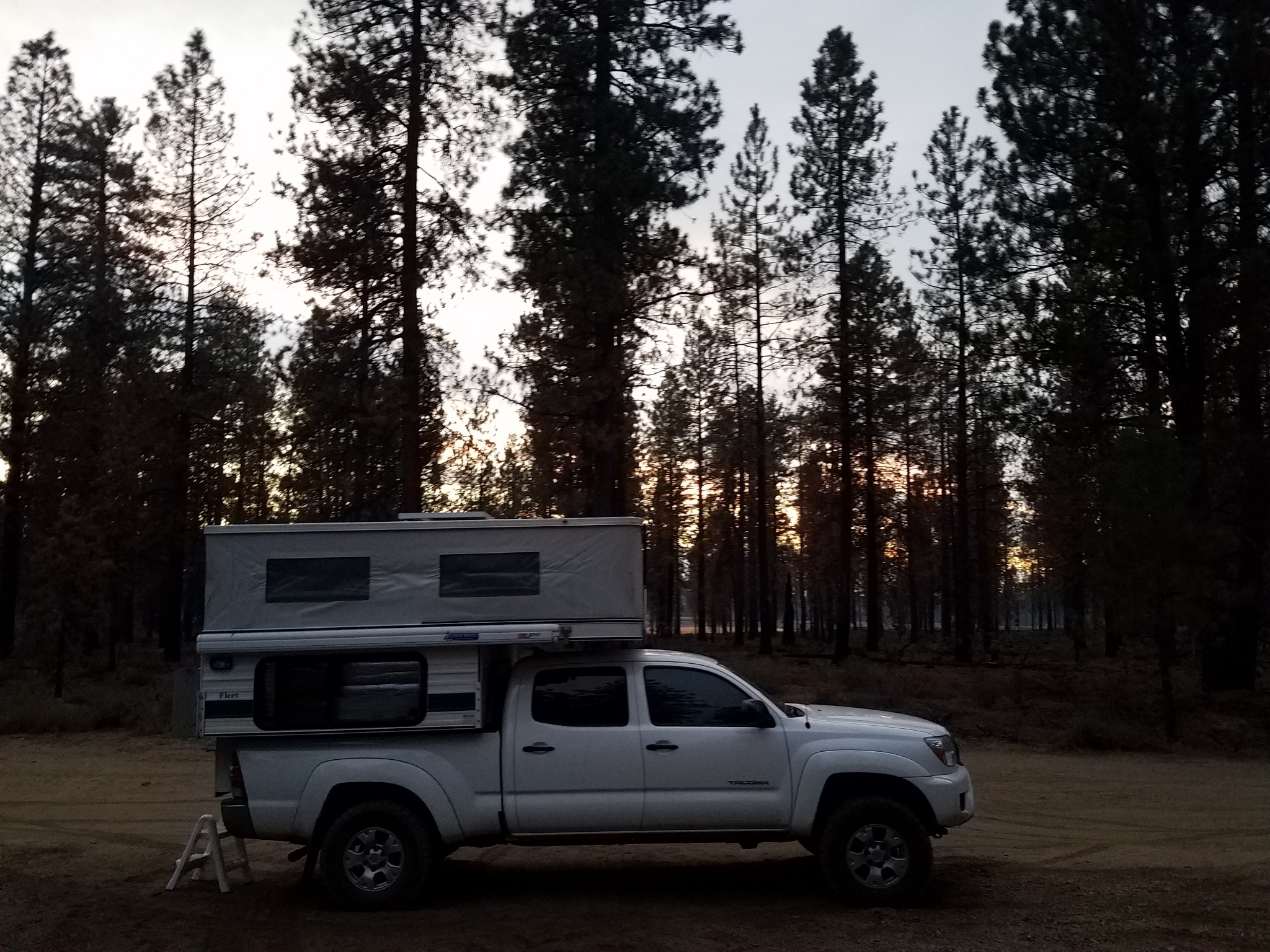 In the morning, I went to the Newberry National Volcanic Monument Lava Butte and walked through a lava field with the dogs. 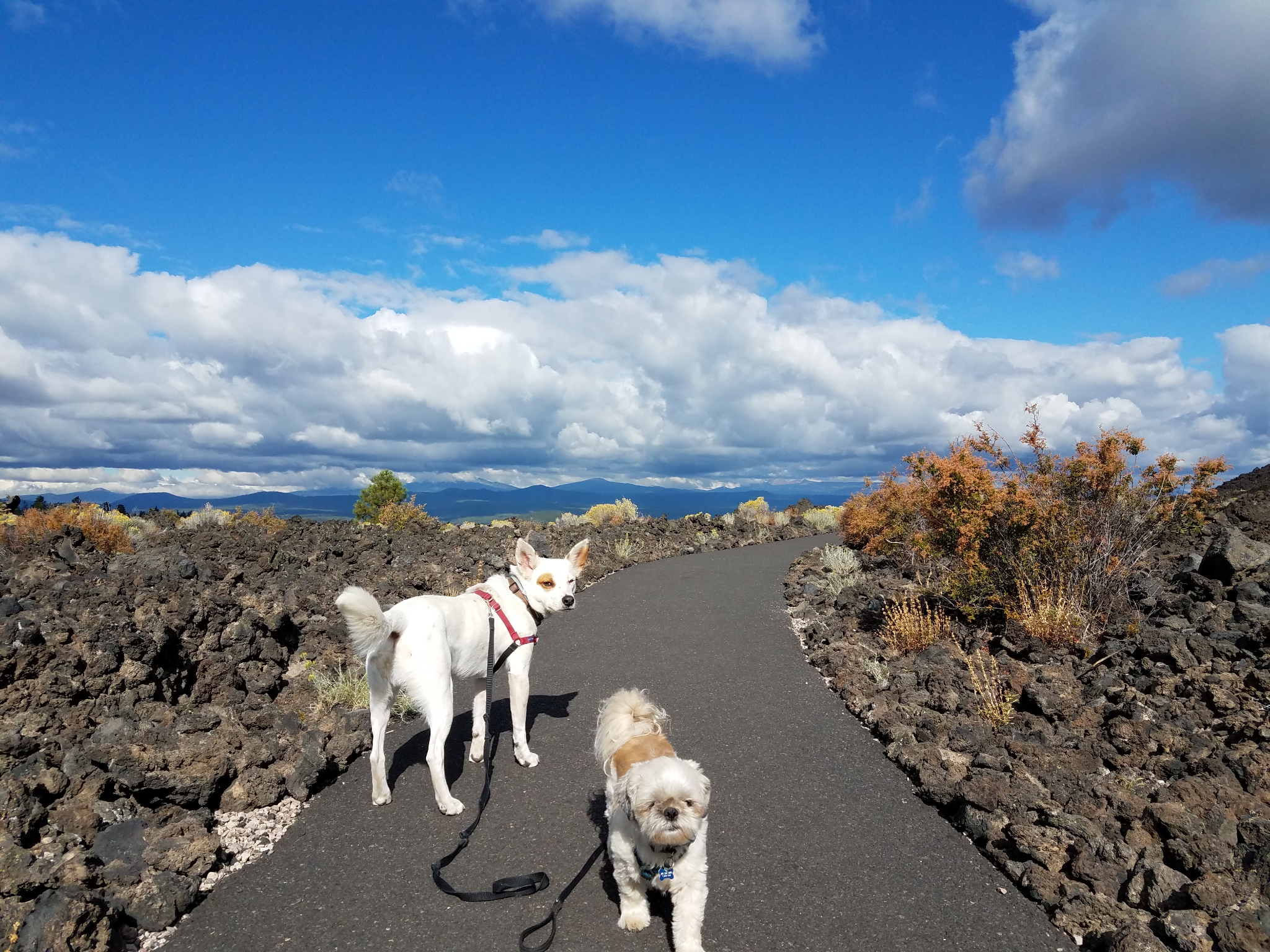 After we walked around there, checked out the Visitor’s Center and stared at the Cone, I decided to try my luck south again as the day seemed pretty clear. I headed to the Big Obsidian Flow and Paulina Lake, also part of the Newberry National Volcanic Monument.

The hike around the Big Obsidian Flow hike is a little less than a mile, and while dogs are allowed, it’s definitely not recommended since you are basically walking around on obsidian pieces which can be sharper than a scalpel.

At the top of the short paved part, you get a great view of this frozen lake. I haven’t been able to find much information about this, except for it’s name, “Lost Lake”. 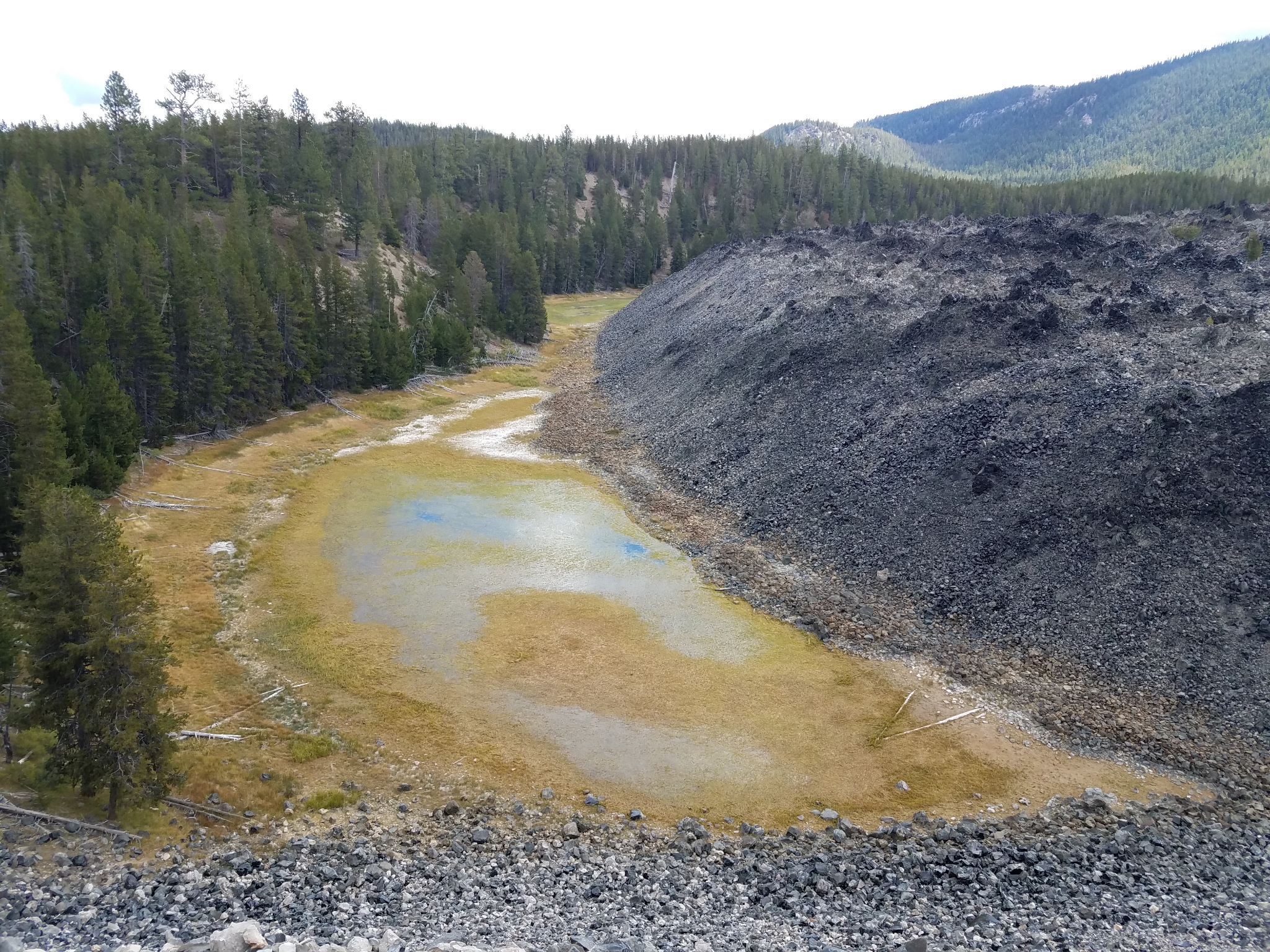 It’s huge and shiny and sharp! 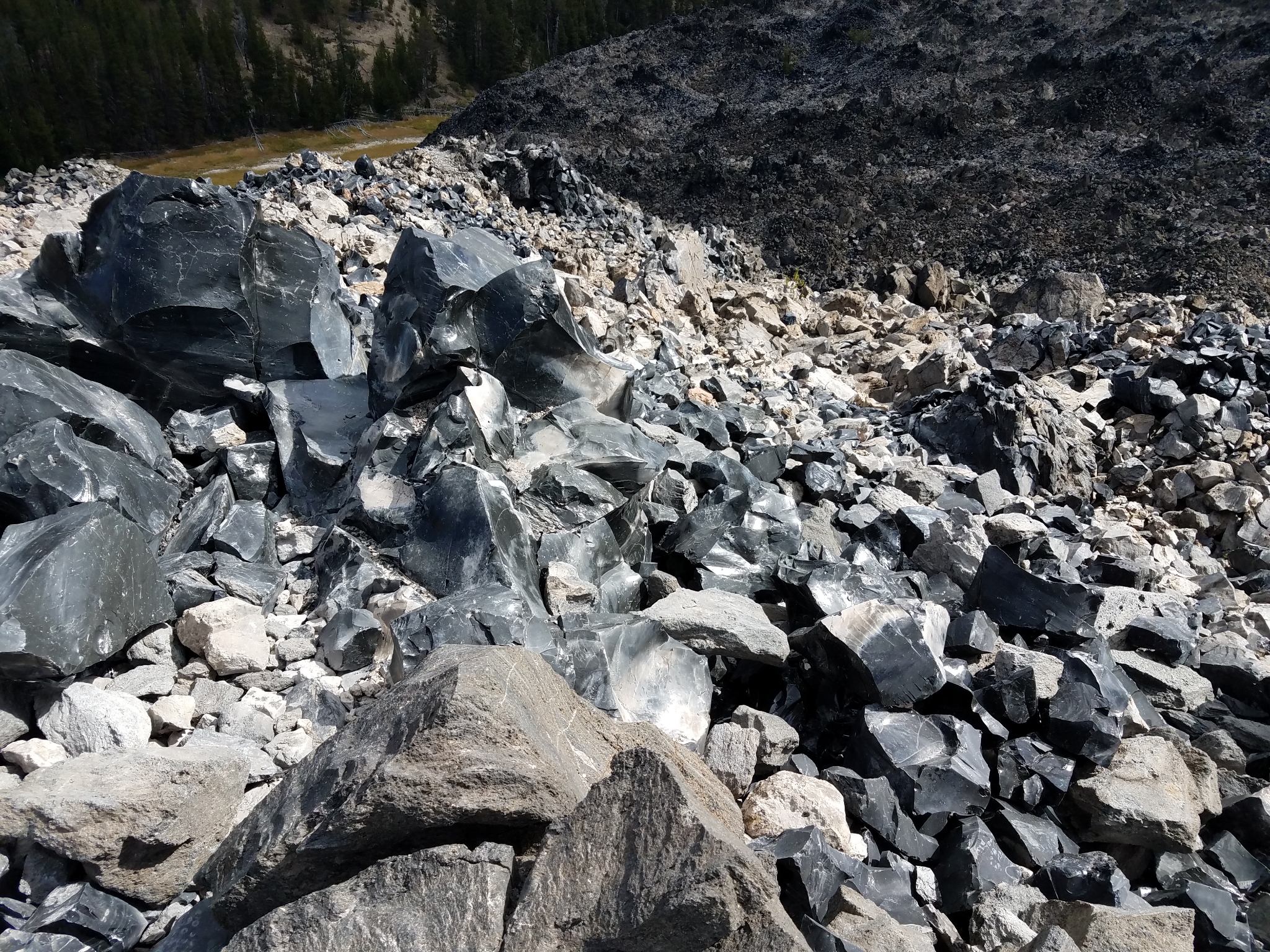 Walking around that Big Obsidian Flow was rather other-worldly and well worth the hike, but I didn’t linger too much and went back for the dogs. I took them to this beautiful 80′ side by side falls created by the Newberry volcano eruption. The last eruption was 1,300 years ago! After a comfortable sleep in a Sno-Park, I drove to Smith Rock State Park and popped up for lunch. 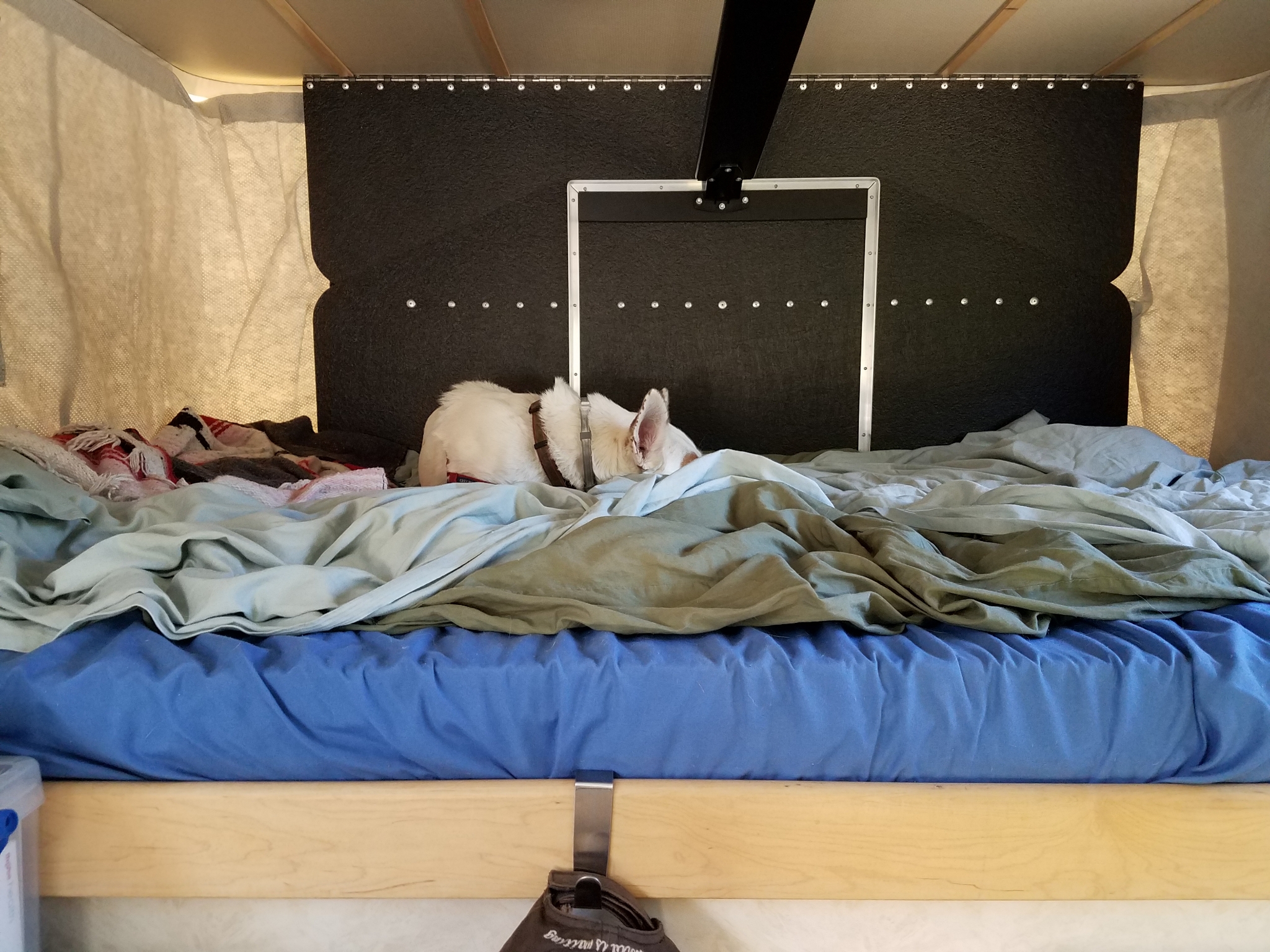 I was too tired to do any hiking, so I found a remote-ish horse camp on my map and made my way there. I got set up and spent the afternoon reading. While I was there, a beat sedan pulled up near the outhouses, used the toilet, sat for about half an hour, then left. A couple of hours later, a hatchback car pulled in near the outhouses and sat for a long while. Mid-afternoon, a man on a four-wheeler emerged from the trail, rode around the campground and seemingly disappeared. The hatchback eventually left, but all this non-campery activity made me feel uneasy.

Early evening I decided that the day-activity was enough to make me not sleep well, so I moved to Skull Hollow Campground, which is just a few miles from Smith Rock State Park. The very nice camp host came by and we chatted for a while. I told him about my misgivings of staying at the lovely horse camp and he said there’d been some drug-related activity in the area and that it was a good choice that I came to the campground. Good to trust the gut feelings.

It was a lovely sunset, and I slept well. 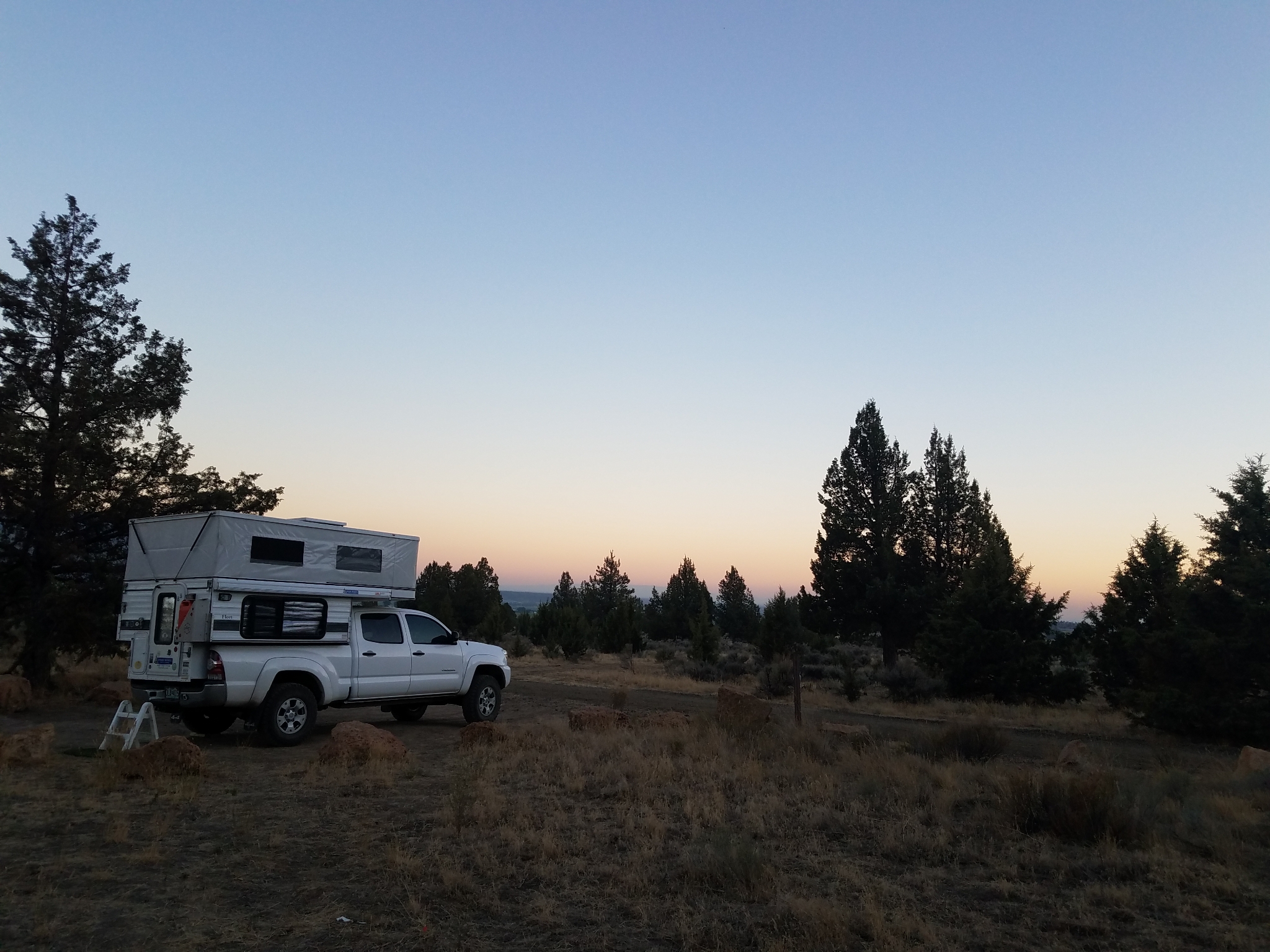 The next day, I drove up to visit newer friends in Northeastern Oregon. We met two years ago in a middle-of-nowhere campground in Cathedral Valley, Utah and stayed in touch. I figured that since I’m in the area, I’d stop in for a visit.

They have beautiful views of the Wallowa Mountains from their living room. 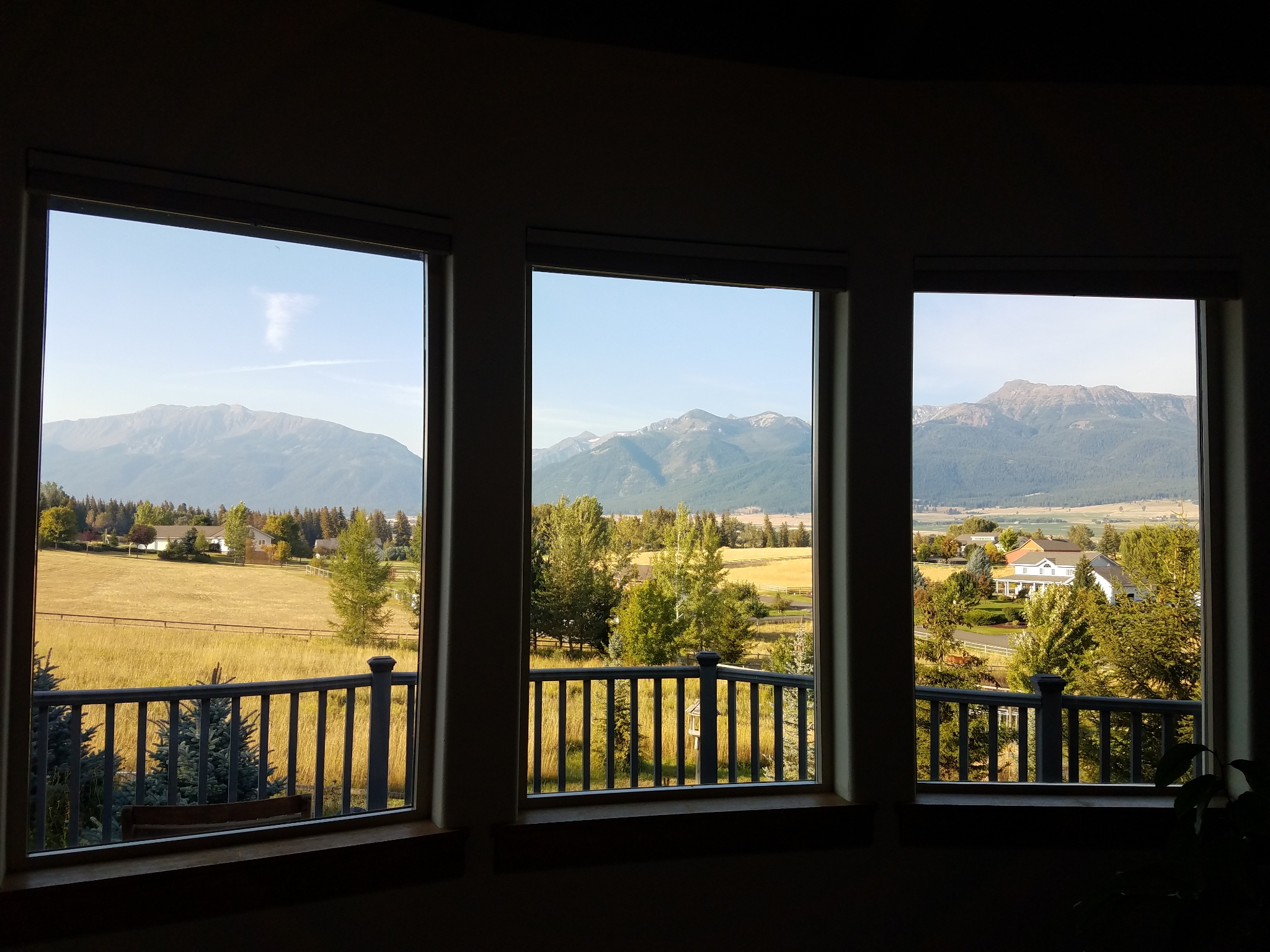 While I was visiting I met an Alpaca named Hercules

at the farm and groomers home that had been recommended to get a very shaggy Sully groomed.
She did a great job! 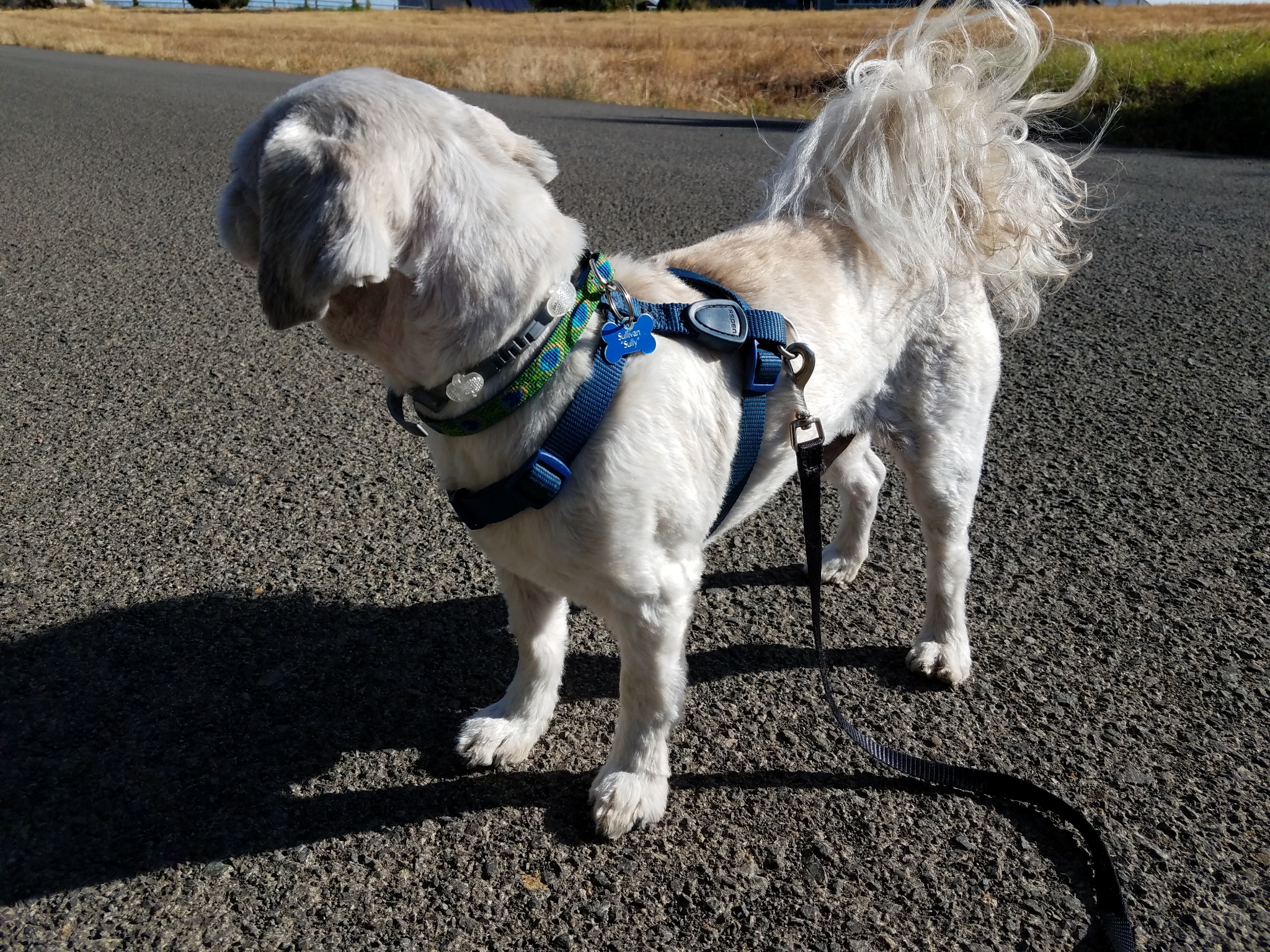 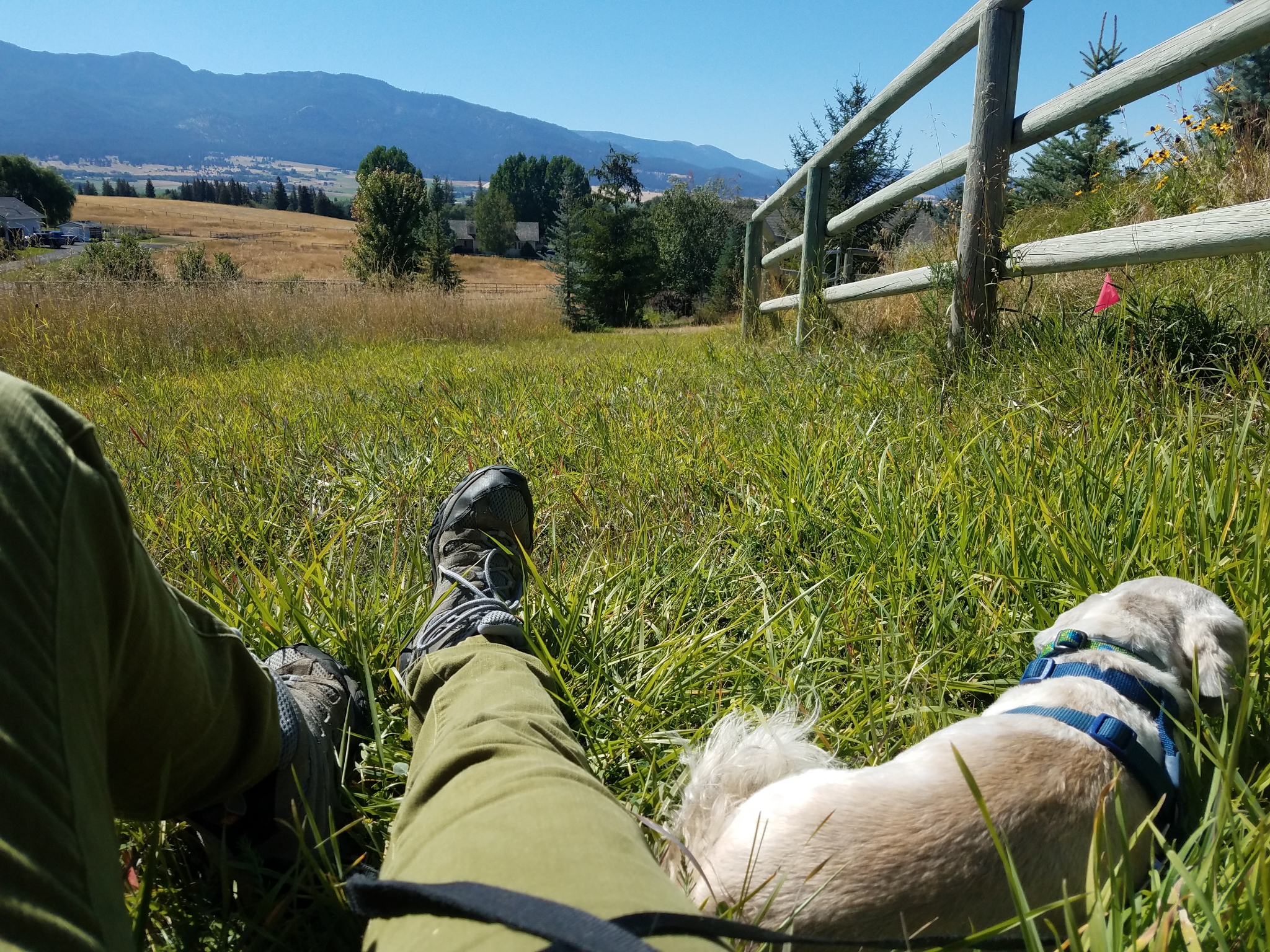 Went to a lake and hiked around with my friends, ate some fantastic food, including my friend’s homemade sourdough bread. 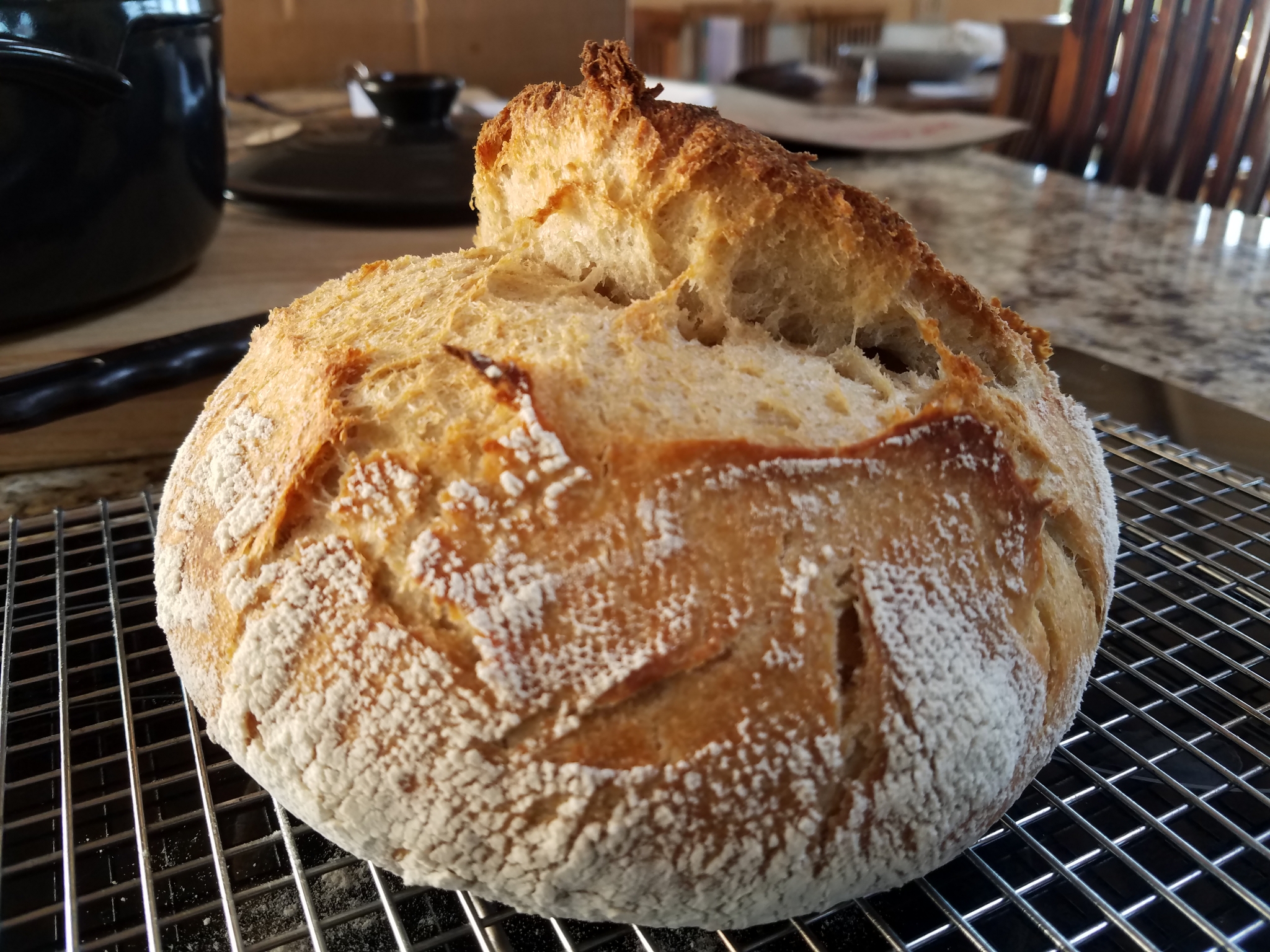 I have been here for a few days now, having a most excellent visit, and tomorrow I leave for new adventures.
The generosity of my new friends has been heartening, to say the least.

I am extraordinarily grateful for all of these remarkable people (and critters!) I have in my life.

(one of my friend’s kitties!)